Having a hot tub in the yard is more than a run-of-the-mill fitness hack. It is a total lifestyle revolution that can make you feel better and look healthier. Because your personal portable spa is always available any time of the day or night, you can make the best use of having one in your backyard. They are economical to operate and easy to care for but provide a wealth of health benefits from head to toe.

Here are three ways to improve your health with a hot tub.

Not enough emphasis is put on state of mind when it comes to a healthy lifestyle. The way you feel about yourself and the world around you will give you a better mental attitude and the ability to deal more positively with the things, both good and bad, that life deals you.

The first way hot tubs improve your sense of well-being is by providing an atmosphere of luxury. While that seems superficial, the pride of place, feeling of extravagance and the beauty that hot tubs create immediately creates a positive mental state. Just knowing that your hot tub is in the backyard waiting for you can make the whole day better as you go about running errands, working or dealing with others.

Once you get home from a long day, slipping into the warm, temperature-controlled water offers effortless comfort, and relaxes the body, mind and spirit. The bubbling massage jets are strategically positioned in a hot tub to workout the tense anxiety that dealing with daily problems creates, and makes you feel alive, happy and invigorated.

While some medications are necessary to deal with life’s health issues, and no-one should stop taking prescribed medicine, a hot tub can reduce the need for over-the-counter medicines to deal with pain. According to the Mayo Clinic, regular use of pain medications such as acetaminophen, NSAIDs, and COX-2 inhibitors can cause kidney problems, bleeding, high blood pressure, headaches, liver failure, stomach ulcers and the list goes on.

Just sitting in a hot tub for a few minutes a day provides cardio stimulation and increased metabolism. It’s a great passive exercise option for people with illnesses and certain diseases where active exercise can be a threat. Hot tubs aren’t just passive though, there are easy ways to make use of even the smallest portable spa for active exercise options. Doing aerobic calisthenics in a hot tub increases their effectiveness, not just because of the heat but because of the water resistance, while at the same time, making those exercises safer and less damaging to joints thanks to the support from the water’s buoyancy.

About St. Peters Source:https://en.wikipedia.org/wiki/St._Peters,_Missouri
t. Peters is a city in St. Charles County, Missouri, United States. The 2010 census showed the city’s population to be 52,575, tied for 10th place in Missouri with Blue Springs.

Interstate 70 passes through the city, providing a major transportation link. In 2008, St. Peters was named the 60th best place to live by Money magazine, putting it at the top in the state of Missouri.[4] It also ranked in Money magazine’s Top 100 in 2010 and 2012.The “Rec-Plex” in St. Peters is an award-winning recreation and fitness complex that underwent an $18.5 million expansion in 2007.[5] The city also hosts the county’s largest shopping center, Mid Rivers Mall.

Prior to the arrival of Europeans, the area that would become St. Peters was inhabited by Mississippian mound builders. The remains of a village were uncovered during the construction of I-70 in 1954 and a street near the site was later named Mound Drive after the mounds built by the villagers.[6]

One of the first documented sources about European settlers in the area is a Spanish census from 1791, which documented a land grant.[7]

St. Peters was named for a Jesuit mission established there.[8] 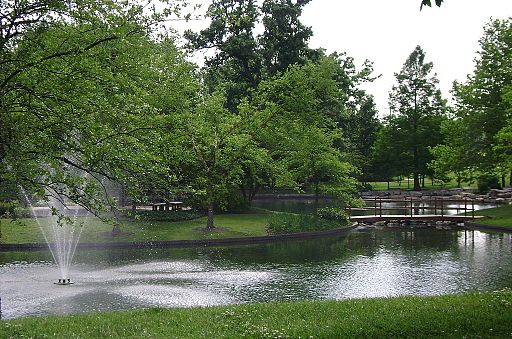 For those looking for more information about St. Peters, MO., here are a few helpful links.
https://www.stpetersmo.net/
http://www.city-data.com/city/St.-Peters-Missouri.html
https://sybergs.com/locations/st-peters/