Hot tubs are popular backyard additions and are easy to fit into almost any space. Having your own portable spa is a great resource for entertaining and spending time with family and friends. They can do so much more for you though. A hot tub in your backyard can go a long way to making your lifestyle healthier.

Here are three ways to use your hot tub for better health.

Portable spas are great stress relievers. We all have stress. It comes at us from all sides every day. There’s almost no way to fight it, but you can eliminate the power stress has to destroy your health.

The stress in life isn’t just big catastrophic dangers that cause the release of stress hormones. It is the every day aggravations such as expenses, work, school, traffic or just having too much to do. Soaking in a hot tub has the ability to wash away the tension and anxiety that stress in life creates.

The feeling of weightlessness and the warmth of the water also help the body relax for a good night’s sleep. Getting to sleep faster is another way your hot tub can give you added health benefits. By soaking in the warm, soothing water, you reset your body’s thermostat.

Make sure to allow at least 20 minutes before bed to cool down, creating the perfect conditions for a good night’s sleep. Being relaxed, comfortable and ready for sleep prepares your body for the day ahead, giving you better concentration and energy to get the most out of your days and it all starts at night, in your luxurious hot tub.

If you have sore muscles from a heavy workload or a vigorous workout the day before, soaking first thing in the morning in your portable spa will help release the lactic acid in your muscles that causes the pain. Then you can go about your day with renewed vigor. Early morning soaks in the hot tub are also great for people with joint pain from arthritis or fibromyalgia.

We have a rich history of serving customers since 1968. We proudly offer: Dimension One Spas Hot Tubs and Spas Including the Bay, Highlife and @Home Collections

About Creve Coeur Source:https://en.wikipedia.org/wiki/Creve_Coeur,_Missouri
Creve Coeur /ˈkriːv ˈkʊər/[6] is a city located in west St. Louis County, Missouri, United States, a part of Greater St. Louis. The population was 17,833 at the 2010 census.[7] Creve Coeur borders and shares a ZIP code (63141) with the neighboring city of Town and Country. It is home to the headquarters of Drury Hotels, and until its acquisition by Bayer in 2018, Monsanto.

The name crève cœur (French pronunciation: ​[krɛv kœʁ], heartbreak) is said to derive from Creve Coeur Lake. According to the city’s website the tale goes that the lake “formed itself into a broken heart” after an Indian princess’s unrequited love for a French fur trapper led her to jump “from a ledge overlooking” the lake. [8]

Written accounts and archaeological finds show that Native Americans inhabited the Creve Coeur area from 9500 B.C. to 1800 A.D. French explorers began farming and fishing in the area in the early 18th century, and fur trappers settled there in the early 19th century. When the area was acquired by the United States through the Louisiana Purchase in 1803, the Lewis and Clark Expedition came through Creve Coeur. During the American Civil War, men from the area served on both sides of the conflict, but most residents were southern sympathizers.[9]

Creve Coeur was incorporated in 1949. Although there are cabins that are more than 200 years old (including two still in Conway Park) in the community, it grew primarily as a stopping point along Olive Boulevard (now Route 340) between University City and Creve Coeur Lake. It expanded faster following construction of Interstate 270 and U.S. Route 40.[10]

The lake and its associated park of the same name, which was the first county park in St. Louis County, is now part of Maryland Heights to the north of Creve Coeur. 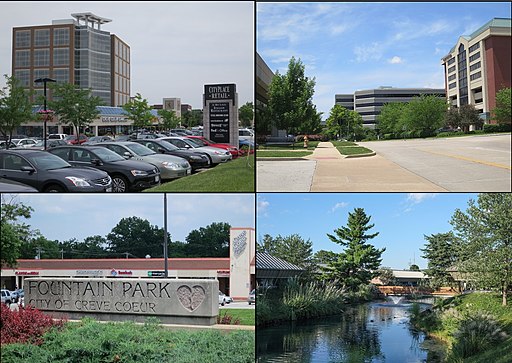 For those looking for more information about Creve Coeur, MO., here are a few helpful links.
https://www.creve-coeur.org/
http://www.city-data.com/city/Creve-Coeur-Missouri.html
https://www.facebook.com/cityofcrevecoeur/